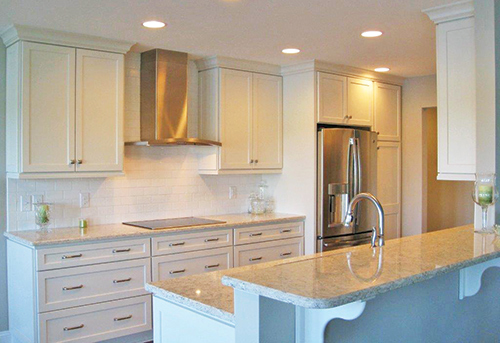 What does it take to get a long-ago former client to seek out a company again?

Workmanship, customer service, convenience - these qualities persuaded Earl and Diana Hughes of Shallotte to rehire Markraft Cabinets when they were ready to design and furnish their waterfront dream house.

The Hugheses are longtime area residents, having lived in Shallotte since 1980. In 2002, they remodeled an older home and used Markraft to install their new bathroom cabinets. That decision was influenced by their son’s experience with Markraft a few years earlier.

“I knew their stuff, and I knew it held up,” Diana noted.

Fast-forward to 2015, when Diana and Earl took the plunge to develop a lot they owned on the Shallotte River.

“We decided we were going to do something with it,” she said about the lot’s unique positioning. “It has a view to kill for.”

Beyond making the river-facing side of the house mostly glass to take in that view, Diana knew just what she wanted.

“I designed the kitchen myself,” she said.

But Diana knew she needed help translating her ideas into something practical. So she started to do her homework, checking out local vendors.

“I used Markraft before and looked around to see if I could find them,” she said.

She quickly found Markraft’s newly designed website and used its “Contact Us” page to reach out to the company’s design staff.

It turned out she was, in fact, the very first would-be customer to make contact through the new website. Soon after, one of Markraft’s kitchen designers, who lived nearby, got in touch with her.

“It was within a day that Markraft contacted me,” she recalled.

At the designer’s urging, Diana and her husband overcame their reluctance to cross the bridge into Wilmington and made several visits to Markraft’s Design Center off Castle Hayne Road.

“The people in the showroom were nice and responsive,” she said, “And we felt we could put our trust in them.”

When Markraft’s receptionist offered Diana coffee, she declined, explaining she was a Sun Drop drinker. The next time the Hugheses visited the showroom, the receptionist had a Sun Drop for her, Diana said.

And during the couple’s first visit, Markraft president Cee Edwards came in to introduce himself.

“How often does that happen?” she asked. 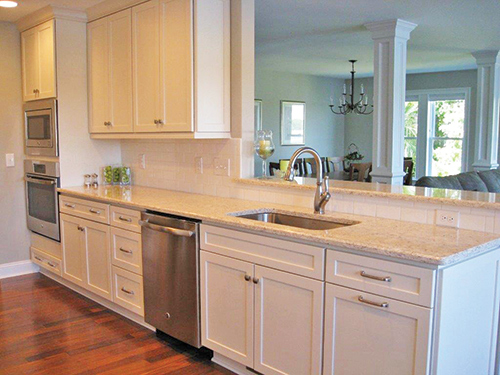 She complimented Markraft’s design team, especially, for respecting her ideas and offering experienced-based suggestions for how best to make them happen.

“I watch a lot of HGTV,” Diana said with a laugh, adding that she had been accumulating ideas for a long while.

She wanted quartz countertops, a large sink and a refrigerator that wouldn’t protrude past the adjacent cabinets but wouldn’t be recessed in an alcove, either. “We designed a pantry cabinet to go beside it,” she said, where the refrigerator and cabinet doors were flush to each other.

The kitchen appliances are stainless steel, another item from her wish list.

On one side of the expansive kitchen, Diana wanted “nice deep drawers to put my pots and pans in” instead of conventional base cabinets. She was delighted to discover all of Markraft’s cabinets feature self-closing drawers and doors.

“I never had those before, and those are really nice,” she said.

In addition to the kitchen, Markraft designed and installed bathroom cabinets and countertops, as well as equipped a laundry room with quartz counters and cabinets to match the kitchen design.

At the designer’s recommendation, all cabinets were extended to the ceiling, rather than leaving an open space on top. Advantages? More space for storage and less exposed area to catch dust.

Since moving in on May 1, Diana said she has been appreciating the “million-dollar view” through her kitchen’s three windows and patio doors - as well as the other windows in the living room and master bedroom - and enjoying a functional, elegant kitchen that is exactly what she wanted.

“It’s beautiful,” Diana concluded. “There’s not one thing I would change.”

And that is why she has made a point of praising the Markraft team for helping her achieve her dream.

“The service was great. Markraft was just fantastic,” she said. “We felt important. We felt like they cared and wanted to make it happen.”

Meet the professional designers who help turn kitchen and bath dreams into reality at Markraft’s Design Center. The designers consult by appointment but drop-in visitors are always welcome to stop by and browse the showroom. The Markraft Design Center is open from 9 a.m. to 5 p.m., Monday through Friday, at 2705 Castle Creek Lane just off Castle Hayne Road.

Since 1985, Markraft has specialized in cabinet and countertop design and installation in residential and commercial construction and custom remodeling. To learn more about Markraft, go to www.markraft.com. Contact Markraft at 910.762.1986 and like Markraft on Facebook at https://www.facebook.com/MarkraftCabinets.

Other Posts from Markraft Cabinets

Get Organized with Space Saving Designs

Design on Display at Parade of Homes

Outdoor Living on Display at Markraft

Get Creative with Kitchen and Bath Designs

Customers are the 'Core' of Markraft's Mission

Remodeling Results Are Worth The Challenges

Markraft Style On Display In Parade Of Homes

Essential Allies For Your Kitchen Remodel

Elegant Kitchen Design Is A Product Of Invisible Teamwork

Remodeling Peace Of Mind: Knowing What To Expect, Who to Call

Island Living: Some New Ideas For That Kitchen Focal Point

Before Remodeling Your Kitchen, Ask These Questions

Plan Ahead For Technology In Kitchen And Bath Design

Be Prepared: What To Expect From A Kitchen Or Bath Remodel